Co-Creation as Methodology for Uncertain Times: Practice, Learnings, and Findings

In this mini-series, we explore how Tactical Tech’s first youth-centered team co-created the public education intervention ‘What the Future Wants’, which was released in Spring 2022. In Part 1, we outlined why we chose co-creation as method to conduct the What the Future Wants workshops. In these times characterised by uncertainty, we found curiosity to be the best way to encourage young people to engage with difficult questions. Here, in Part 2, we dive into the workshops we conducted and share principles and practices that informed the co-creation process and findings from the workshops.

The What the Future Wants co-creation took the form of a workshop that was designed in three parts (explained below). We worked with six partners in the UK, Czech Republic, Ireland, Slovenia, North Macedonia, the Netherlands (and some associated partners in Germany, Turkey, Greece etc.). Approximately 200 young people (between the ages of 13 and 18) participated in around 10 workshops and were selected by our partners, both through existing networks and open calls. Some of the workshops were delivered by Tactical Tech in English, and in collaboration with the partners, and others were delivered independently by the partners, in their local language.

The workshop was designed in three parts, three hours each (occasionally shortened where necessary by the partner), which expanded in scale and perspective (individual, group, societal, planetary) as the participants progressed. There were always a facilitator, a note-taker, and a tech supporter. The three parts were:

One of the first challenges was understanding the distinction between the different terms surrounding co-creation: ‘co-design’, ‘co-development’, ‘co-production’, which are often interchangeably used. A concern was that we could not claim co-creation if the created outputs were not directly designed and produced by the participants. However, it soon became clear that co-creation can take many forms and does not always result in co-design (the co-creation and design of a specific output within a community). Our approach of co-creation was focused on participatory action research, which we then used as the building blocks for creating the content.

Interlinked with this challenge was the dynamics of powerwhich are a recurring theme in co-creation analysis: ‘who decides the terms of engagement, what media is made and by whom, and why and who benefits from this type of project.’(1) As the designers of the workshop, and the creators of the resulting exhibition, we had to be very careful to not set the agenda of the space. How can you encourage open and exploratory questions if you do not have a structure or a starting point? We soon found out that a structure is necessary, and within that structure you need activities that act as starting points for thought and exploration.

Caption: Visual of "most and least favorite things" as defined by our sample of young people; courtesy of Dominika Knoblochová

Warm-up: Most and least favorite things about technology

As an example of a simple activity used to warm up the sessions, we gave participants space to share with us how they experience technology by stating 1) their favourite thing about technology and 2) their least favourite thing about technology. They could answer both the questions or just one. The answers that emerged gave us a surface-level insight into the worlds they were inhabiting. Some of the favourite things were simplelike  ‘sharing’, ‘finding inspiration’, ‘communication’, ‘organisation’, ‘(ability to) simplify tasks’. Others were more profound such as: ‘I don't know where I'd be if I wasn't able to create digital art and things like that’, ‘_technology can be a great way for people to get educated, to discover who they really are’, and ‘(my favourite thing) community, finding understanding, the possibility of expression’. Their _least favourite aspects of technology revealed the darker side of their day to day experience and included ‘body shaming’, ‘doom scrolling’, ‘when it stops working’, ‘difficult to distinguish fake from reality’ , ‘no accountability’, ‘cyberbullying’ and ‘the most irritating thing for me are the rules that are now in place for the internet. Those are quite old. So yeah, there aren't really any rules for the internet we have right now.’

Despite this being a short warm up activity, we came back to the answers time and again to remind ourselves of the where the participants were coming from, how they were defining the issues and what they wanted to protect.

Activity: How others see you

When we used stereotypes or pre-existing narratives, we used them as a provocation. One activity the ‘Stereotype Spectogram’ used common tropes about teens and technology taken from media headlines: ‘Teenagers are addicted to technology’, ‘Technology harms teenagers’ mental health’ and ‘Teenagers are vulnerable to fake news’. This acted as a counter-space, an opportunity for the participants to orient themselves close to or far away from an assumption that the ‘other’ (the media, parents, teachers) had made about them. Using a spectrogram—a scale with ‘agree’ on one end and ‘disagree’ on the other, and everything in between—we asked the participants to place themselves and then explain their position. For example, ‘teenagers are addicted to technology’ resulted in a vibrant discussion that showed the nuanced and often complicated reality that was not reflected in the blanket headline:

A surprising observation was that with all the ‘stereotype’ statements resulted in a distribution of responses across the scale, there was almost never a majority agreement or disagreement to a statement and as the discussion unfolded, some participants shifted their perspective to be more inclusive of somebody else’s experience.

Similarly, when we introduced the statement ‘technology harms teenagers’ mental health’ there was a broad spectrum of responses, such as:

A few insights came from these discussions. In particular, it became clear that there was an awareness about the issues that we presented, even if they were over-simplified. Also, although many of the answers on paper lacked clear nuance, when in discussion with the young participants, there was an implicit nuance emerging, which could then be used to adapt the subsequent activities to a level that challenged the group without pushing them in any direction.

Setting the expectations, from both the facilitator and participant perspective, is really important and finding a balance between opportunity and capacity is a good starting point. Many opportunities may arise from doing a co-creation process: perhaps there is an unexpectedly high level of engagement and commitment from the participants, or various networks are created as a result of the collaborations, and this creates the opportunity for further collaboration and engagement.

At this point it’s important to ask: how much time commitment would that require? And do we have the capacity to carry out this additional collaboration in a sustainable and constructive way? To avoid unsustainable or aimless co-creation collaborations: communicate clearly (and early on) what is expected from the participants; decide on a start date and an end date for the co-creation process, or if there is no clear end-date, then state the reason for that; when new opportunities for collaboration present themselves, reflect on if there is enough capacity and time and, if they go ahead, then who is best suited to take them forward. It is very possible that at the point of closure, the participants can continue a form of co-creation or peer-to-peer learning independently.

Another challenge and learning was the documentation of the workshop. As the workshops were carried out by multiple partners in different formats, iterations and languages, we were not always able to thoroughly document the findings. An advantage of doing the workshops online was that it was much easier to capture the conversations and outcomes from group activities because they were centralised in one place, and on one platform. We also had one note-taker. 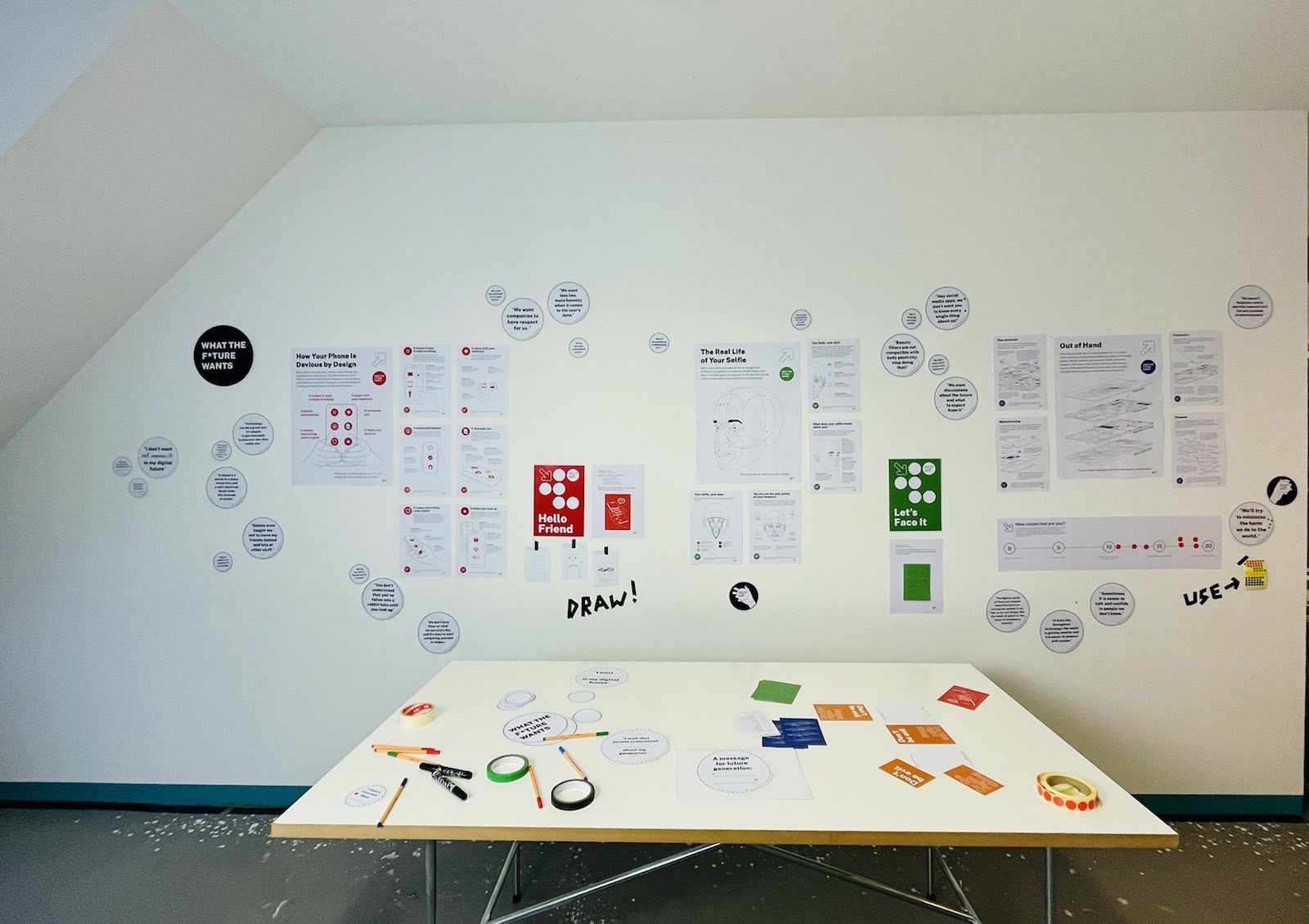 With the help of six partners, we ran around 10 of these co-creation workshops over the course of approximately 4 months in 2021, engaging approximately 200 young people (between the ages of 13 and 18). After compiling the results of the workshops, we at Tactical Tech analyzed common threads and particular areas of interest that recurred among the young people in these sessions. As it goes with Tactical Tech projects, the next steps involved several rounds of conceptualisation and iterations of our new resources. Some of the What the Future Wants materials matched with and were adapted from The Glass Room resources, while others were new and required research, development, prototyping and testing. Once the materials were finalized, the localization process followed. In Spring 2022, we launched What the Future Wants and began the next steps of building additional partnerships to see how the materials could be used in communities around the world.

Original essay written by Daisy Kidd. Thanks to Dominika Knoblochová for coordination and support during the co-creation process. Reformatting and edits into a mini-series by Safa Ghnaim, Stefanie Felsberger, and Christy Lange. If you are working on similar topics and want to collaborate, we would love to hear from you. Please write to the team at youth@tacticaltech.org.

This series outlines the initiation, delivery, and findings of the What the Future Wants project (so far) in the hope that other organisations, initiatives, and individuals working with young people can learn from our experience and the rich insights of all of the young people who contributed.

Digital You: creating a movement around digital and media literacy in Sub-Saharan Africa

The Digital You initiative is a collaboration between Goethe-Institut Kinshasa and Tactical Tech, that invites young people in Sub-Saharan African countries to think critically about their relationship with digital technologies and how tech influences their lives.

[Deadline extension] Call for partners: Join the ‘What the Future Wants’ project to empower young generations

Tactical Tech is looking for partners to collaborate with the What the Future Wants (WTFW), a project that aims to put young people in the driving seat of their digital futures and enable them to think critically and proactively about the digital environment they want to live.

Navigating Libraries and Archives for Investigations

Explore how to use local or digital libraries and archives more efficiently, and take an in-depth look into their possibilities and resources with a new guide from Exposing the Invisible: The Kit!

Our 'Exposing the Invisible' project is looking for consultants from the European Union who have training and curriculum expertise in the field of investigation, research and data exploration. Learn more and apply by 21.12!

What are the persuasive design and 'dark patterns' that keep us hooked to our phones? The Unboxing Tech Toolkit, developed by the Pranava Institute alongside young people in India, is a youth workbook about how technology can tune our behavior, emotions and attention, and importantly, what can be done about it.

Detox de Datos Latinx is a social media campaign and project for young people in Latin America and the Caribbean to educate their peers about data and technology, based on our Data Detox x Youth.

What do young people need to know about artificial intelligence (AI) in order to use it responsibly and make informed decisions? Our co-founder Stephanie Hankey spoke to the Goethe-Institut about the need for educational institutions and civil society to join forces to promote digital literacy.

Check out this updated visualisation of the data you give away when you click 'I Agree', with key phrases from the terms and conditions of popular apps and services.

[Our partners] Interview with Soledad Magnone, Director of the JAAKLAC iniciativa

See what’s new on the Exposing The Invisible website!

Co-Creation as Methodology for Uncertain Times: Practice, Learnings, and Findings

Call for Partnerships: Enhance our research on the influence industry

Digital You: creating a movement around digital and media literacy in Sub-Saharan Africa